After a long, cold and snowy winter on Nantucket, it’s nice to look forward to the coming of spring! Here are our top 10 sure signs that spring has arrived!

Photo courtesy of the Cornell Lab of Ornithology

The distinctive mating ritual of the woodcock has begun. The male performs a “sky dance” at dawn and dusk, where he soars high and then descends sharply to the ground, making distinct twittering sounds produced by air passing through his outer primary feathers. While on the ground, he issues a series of sharp, nasal “peent” calls to attract mates. Listen for them now in open fields near Altar Rock and Sanford Farm/Ram Pasture.

These tiny creatures sure can make a lot of noise! Very soon, during our first warm(ish) spring rain, male spring peepers will start chorusing from wetlands and vernal pools. At dusk, males attract mates by singing, or peeping, by inflating, and then expelling air from their vocal sac. Let us know when you here the first chorus of the season!

All photos courtesy of Cornell Lab of Ornithology

You might have noticed an increase in early morning bird chatter lately. Three of our resident bird species, the black-capped chickadee, the northern cardinal and the Carolina wren have started singing their little hearts out in anticipation of spring. 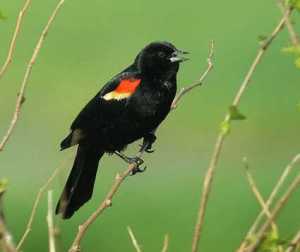 Photo courtesy of the Cornell Lab of Ornithology 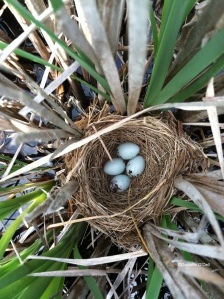 The call of the male red-winged blackbird is hard to miss. They are often heard screaming “conk-la-REE” from the highest perch they can find. These glossy black birds with red and gold epaulets are common in Nantucket’s cattail marshes and wetlands.

One of the earliest reptiles to emerge from hibernation, spotted turtles come out to bask on sunny days beginning in early to mid March. They won’t begin feeding or mating until a bit later in the spring once the water temperatures rise.

Adult plover and her chick!

Piping plovers and other beach nesting shorebirds will be returning to Nantucket soon and could start nesting in late April to early May! By early April we should begin hearing the familiar “peep-lo” calls from males that are setting up and defending territories and attracting lady plovers.

Male catkins of the beaked hazelnut

One of the earliest blooming shrubs on Nantucket is beaked hazelnut. Each plant has both male and female flowers. The drooping clusters of male flowers  (catkins) elongate, and when they open to disperse their pollen, it is carried by the wind to pollinate small ruby-colored female flowers scattered along the twigs.

Beginning in mid to late April, horseshoe crabs come to shore to mate and lay eggs during high tides surrounding the new and full moon. Giant females are often seen dragging around one, or several, much smaller males. Several organizations on island, including NCF, are now conducting annual counts of crabs because of concern about declining populations of these ancient creatures.

Red Maples are also early and conspicuous bloomers in the spring. The bright red flowers burst out of buds before the leaves do, and the color attracts bird and insects to the nectar and pollen. Found in swampy, boggy areas of the island such as Squam Swamp, red maples often have submerged roots that provide excellent habitat for hibernating spotted turtles.

Last but certainly not least, spring is lambing season at Squam Farm. The arrival of these little cuties in late April and May is always one of our favorite events of the year!

Happy Spring! Get out and enjoy the sights and sounds of spring time on Nantucket!

1 Response to Signs of Spring!