In 2009, Andrew Mckenna-Foster, Director of Natural Science at the Maria Mitchell Association, found the very first record of a four-toed salamander for Nantucket in the vicinity of Sesachacha Pond! Andrew was working on another project at the time and incidentally found the four-toed salamander underneath a plywood board meant to attract snakes. Up to that point, it was presumed that our only salamander species on island was the ubiquitous red-backed salamander, a species very commonly found in the early spring underneath logs and leaf-litter in our forests.

In the following few years, Andrew searched for other specimens of the four-toed salamander and found a few on NCF’s Squam Farm and Squam Swamp properties. With a permit from the state of Massachusetts, Andrew was able to collect two specimens to deposit in the Maria Mitchell collection and at the Harvard Museum of Comparative Zoology, thereby officially documenting the species as occurring in Nantucket County. While searching for these specimens, Andrew and his assistant also found a nesting female with eggs in Squam Swamp!

This spring, NCF decided to follow up on Andrew’s work to try to learn more about this species on our properties. We searched Squam Swamp with the goal of documenting which wetlands were important to four-toed salamanders, how big the population might actually be, and locate nesting females. To date, we’ve found more than 100 nesting females, each with approximately 15-20 eggs! Not bad for a species that we didn’t even know existed on island just a few years ago!

Four-toeds are very small salamanders that are distinguished from other species by having an orangey-brown back, a distinct constriction at the base of the tail and a beautiful white belly speckled with black flecks. As the name implies, they only have four tiny toes on their hind feet. Females are slightly larger than males.

Underside of a male four-toed salamander

Four-toed salamanders have quite specific habitat requirements. They spend the winter underground often with other male and females of the same species, as well as with red-backed salamanders. They emerge in the very early spring and migrate to dense shrubby wetlands with large hummocks of Sphagnum moss. The females generally lay 10-20 eggs in the moss and brood their nests until hatching. We found several instances of communal nesting where multiple females laid in the same location but only one female tends the entire nest of 50-60 eggs! The eggs develop quickly and hatch within 35-40 days. The larvae drop directly in to the water and feed until metamorphosis. At this point, the juveniles, which look like very small adults, will leave the wetlands and head for the forest floor to hide under loose bark, downed logs and leaf-litter. 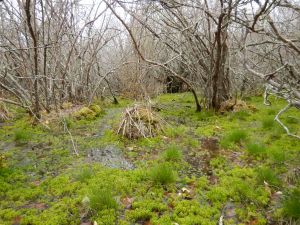 While nesting of four-toed salamanders is nearly complete already for the spring of 2015, NCF plans to continue searching for wetlands in the Squam area that host populations of this species in the spring of 2016!