Garlic Mustard: Friend or Foe in the Battle Against Deer Ticks?

Recently I heard a provocative statement to the effect that “garlic mustard is Mother Nature’s way of getting rid of deer ticks.” Naturally I needed to find out more. Could this actually be true? After spending hundreds of hours working with field crews managing this plant by hand-pulling in Maine, New Hampshire, Massachusetts, not to mention here on Nantucket, I wanted to find out more. In a lot of areas, there is no way this plant will be eradicated, since it has a way of spreading in backyard compost piles and getting moved around in soil or mulch. Even though it has been shown to negatively impact native wildflowers and even poison rare native butterflies, I wondered if it could be an ally in our battle against disease spreading ticks? Ecology is certainly full of unpredictable costs and benefits.

Spoiler alert: all research points to garlic mustard actually INCREASING deer tick populations. Not the silver lining I was hoping for, and here’s why:

First, a little background info about this plant. Garlic mustard (Alliaria petiolata) is a non-native species that was introduced to North America by human settlers as a food plant. It’s in the cabbage family (Brassicaceae) and its original home was Eurasia. Since it was brought to North America, it has spread in 34 states; it’s been classified as a “noxious weed” in 6 states and as an “invasive” species in several others (including Massachusetts, where it is also on the list of MA Prohibited Plants). Garlic mustard has caused the most concern in forests, where it spreads rapidly and can crowd out native wildflowers and tree seedlings, which are already at high risk of over-browsing by burgeoning deer herds. This article from Harvard Forest gives a great overview of research on garlic mustard and how it affects native forest ecosystems.

Now let’s zoom in on Nantucket. Driving or walking around the island, you may have noticed patches of vibrant green plants topped with clusters of white flowers, that spring up seemingly out of nowhere in mid-May. These patches usually appear in shrubby areas, road edges, or neglected corners of yards. A closer look reveals plants that start out as tiny rosettes (seedlings with leaves clustered at the base of each plant) of kidney-shaped leaves; a little later, many of the older plants shoot up flower stalks sporting arrowhead- or heart-shaped leaves with toothed edges.

Garlic mustard rosette (cluster of leaves that forms before the plant flowers).

Take a good sniff of a handful of the crushed foliage to clinch the identification: the garlicky scent gave this plant its common name, garlic mustard. It’s related to the plant that produces the mustard seeds ground to make mustard condiments, and to mustard greens eaten in salads and stir fry.

It’s undeniable that garlic mustard has its uses: the garlicky flavor means it can be used in stir fry dishes or ground up to make pesto. The small first year rosettes are high in cyanide to deter browsers though, so it’s best to harvest the second-year plants, the ones that are just beginning to flower. Check out this website to learn how people cook with garlic mustard. ALWAYS be sure of a plant’s identity before consuming it–check with an expert if you are not completely sure. And avoid picking and eating plants from along roads or pathways where they can be contaminated with dust and oil, or used as sign-posts by passing dogs!

But, back to garlic mustard’s dark side: the garlicky chemicals and cyanide deter deer and other browsers. Instead, the deer prefer to eat native wildflowers, which they have co-evolved to be able to consume without ill effects. The chemicals also leach into the soil and prevent other plants’ seeds from germinating, a neat trick called allelopathy that gives plants and edge over their competition. Researchers have found that garlic mustard’s chemicals seeping into the soil can harm tree seedlings and affect the future of a forest. Even when tree seedlings survive being munched by deer, garlic mustard’s chemical warfare still makes it hard for new trees to get a good start; they really need the soil fungi to help their roots get the proper nutrition.

It turns out that the same garlicky chemicals that harm the mycorrhizal fungi (needed by plants and trees), also kill fungi that would infect and reduce populations of deer ticks. So, in fact, the spread of garlic mustard in your yard and local natural areas is NOT a way to reduce tick populations…it might be doing the opposite, actually. Scientists arrived at similar conclusions in different studies: Keesing et al. (2011) studied the effects of garlic mustard chemicals on fungi in a laboratory setting and reported the results in the journal Ecoscience, Volume 18(2); Vaicekonyte and Keesing (2012) conducted another experiment by removing garlic mustard in the field and reported their results in the journal Invasive Plant Science and Management Volume 5; finally, Stafford and Allen (2010) at the University of Nebraska applied the fungi (ones that were shown to be inhibited by garlic mustard chemicals) as a method of biocontrol and found that they reduced tick populations, reported in Digital Commons Publication 1064.

Based on this detective work, it still makes sense to keep garlic mustard populations low in order to protect native plant diversity. But it also makes sense in the struggle to lower deer tick populations and tick borne diseases. If you are interested in learning more about invasive plants and helping island conservation groups with invasive plant removal activities (hand-pulling and digging), check out the Nantucket Biodiversity Initiative website invasive species page, where you can find contact info for the Invasive Plant Species Committee co-chairs. We’d be happy to have your help!

And don’t be shy about hand-pulling garlic mustard in your yard. Bag the pulled plants and bring them to the Nantucket Environmental Park (AKA, “the Dump”) where there should be a new container for disposal of invasive weeds. Your home compost pile or the landscape waste pile are not good places to dispose of pulled weeds, since the seeds can mature even after the plants have been pulled up, and regular compost doesn’t usually get hot enough to reliably destroy seeds. 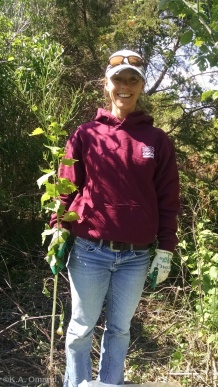 Garlic mustard can grow a few feet tall and each plant can produce hundreds of seeds.

The Nantucket Conservation Foundation is a private, non-profit land trust that depends on contributions from our members to support our science projects, conservation property acquisitions, and land management efforts. If you are not already a member, please join us!

1 Response to Garlic Mustard: Friend or Foe in the Battle Against Deer Ticks?