*Please note, this blog post was originally published in The Inquirer and Mirror on December 1st, 2016  in the article series called Island Ecology. The Foundation’s Science staff will be regularly contributing to our local newspaper and reprinting articles here the following week.*

Earlier this summer in our Island Ecology column, we reported on the discovery of a new species for the Island – the Northern Long-eared Bat. We’re back to give an update and to send out the bat signal to ask for help from Nantucketers!

If you missed our column in the September 1, 2016 edition of the Inquirer and Mirror, here’s a brief recap. The Science and Stewardship Department at the Nantucket Conservation Foundation, with support from the Nantucket Biodiversity Initiative, has been working with Zara Dowling, a Ph.D. student at UMass-Amherst, to study the bat populations on Nantucket, as very little is known about the bat species that call our island home. In particular, Dowling was hoping to find evidence of the northern long-eared bat (Myotis septentrionalis), a small, insectivorous, forest-dwelling bat. Historically common, populations of this species have declined by over 90% in the northeastern United States over the last 10 years because of the spread of a fungal disease, White Nose Syndrome (WNS).  This fungus grows on the bodies and wings of bats during hibernation, leading to unusual behavior including awakening and activity in the winter, which leads to loss of water and fat reserves, and eventually, death. The northern long-eared bat typically hibernates in caves in high densities – up to several thousand individuals. The cool, moist environment of a cave is conducive to the spread of the fungus and is very easily passed among bats during hibernation. Because of the devastating impacts of white-nose syndrome, this once very common bat is now listed as “Threatened” federally and “Endangered” in the Commonwealth of Massachusetts.

Before the outbreak of WNS, northern long-eared bats were common on Cape Cod, Martha’s Vineyard and Long Island but were not known to occur on Nantucket. While bat populations were declining rapidly in the northeast, it appeared that they were doing fine in these other coastal areas. Healthy, breeding female bats and juveniles were documented on Martha’s Vineyard which led researchers to wonder what is it about these coastal areas that seem to be protecting them and could they be found on Nantucket too? Could they possibly be hibernating on the islands rather than in large colonies in caves where WNS is so prevalent?

Beginning in 2015, in an effort to determine whether Nantucket might be providing a safe haven for these bats, Dowling placed acoustic detectors in several locations across the island to listen for bat calls. Dowling confirmed that northern long-eared bats were present in almost every location in which she placed the detectors. The next step was to discover whether the bats were breeding and successfully rearing pups here. To accomplish this, in July of 2016, we set up nets made of a very fine mesh near the acoustic detectors that had picked up high levels of activity from what we believed to be northern long-eared bats. Within just a couple hours after sunset, we had captured 10 northern long-eared bats! All captured bats were either adult lactating females or juvenile bats, providing solid evidence indicating a breeding population here on island. Not only had we just confirmed the presence of a new species for the island of Nantucket, but we also confirmed a healthy, breeding population too! 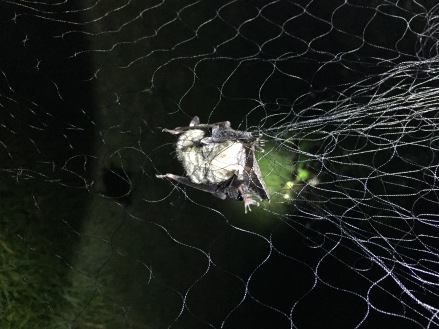 Dowling placed tiny transmitters, called nano-tags, on the backs of three of the largest female bats. The frequency of each nano-tag has an individual signature that allowed us to track each bat to its roost. In the late summer, bats roost either singly (usually males or non-reproductive females) or in what are known as maternity colonies composed of female bats (usually related), and their pups. Once the roost structure was identified, we returned at sunset to watch and count the bats as they emerged for the evening. 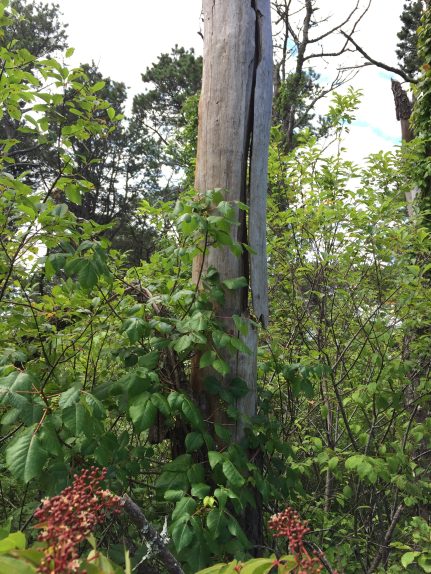 We are now at the point of identifying one more very important piece to our bat puzzle – are these bats hibernating on Nantucket? While everyone else was trick or treating on Halloween night, we were once again back out setting up nets and capturing bats. We were lucky enough to capture one male northern long-eared bat that evening and placed a nano-tag on it. Just having this bat present on island at this time of year is pretty solid evidence that they are likely hibernating here. But this little bat took us one step further – we were able to track this bat to the crawl space of a house, where we found five more of adult northern long-eared bats. We believe this to be a hibernacula and will continue to follow these bats through the winter. 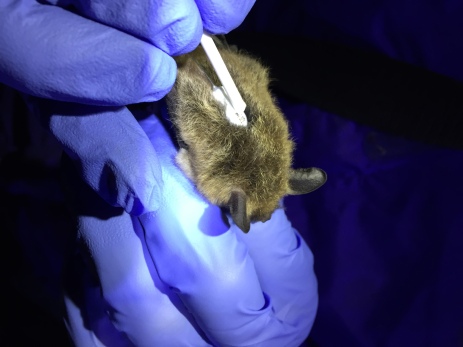 This is big news for Nantucket and the conservation world. Nantucketers, we still need your help in order to build up more evidence of the importance of the island to the preservation of this species! If you suspect that you have bats hibernating in your crawl spaces, basements, old well, etc. please give us a call at the Nantucket Conservation Foundation and let us know! (508) 228-2884.

We understand that many of you may have some reservations about discovering that you have a threatened species on your property. Because the decline of this species was directly caused by the spread of white-nose syndrome and not due to habitat loss or destruction, this species was listed with special rules and exemptions that are not nearly as restrictive as those for other critically endangered species. Specifically, there are no regulations restricting what can be done to human structures even if they contain northern long–eared bats.  You can find more information about rules and regulations as well as the natural history of these animals on the US Fish and Wildlife website – http://www.fws.gov.

The Nantucket Conservation Foundation is a private, non-profit land trust that depends contributions from our members to support our science projects, conservation property acquisitions and land management efforts. If you are not already a member, please join us!  www.nantucketconservation.org